The foundation of the Lodge ‘Keys of Münster’ No.881 GC

On March 15, 1958, Br. Eduard Möller, who was then acting Worshipful Master (MvSt) of the Lodge "Zu den Drey Balken" No. 127, established a connection with the Worshipful Master of the Lodge "Britannia" No. 843,  which had been founded in Bielefeld in 1957, Bro. Major Robert G. Holmes. This led in initially to Lodge "Britannia" occasionally working in the temple in Münster. Worshipful Brother Holmes also held the office of the very venerable District Master of the English group within the "United Grand Lodges of Germany" (VGLvD). From this first contact arose a plan to found a new British Lodge in Münster, the Lodge "Keys of Münster" No. 881.

The Brethren of the Lodge "Zu den Drey Balken" Nr. 127 were invited in writing by Brother Capt. E. J. Hebblethwaite in July 1961 to become founding members of the new Lodge "Keys of Münster" No. 881. This was discussed at a lodge meeting in September 1961. The foundation of the Lodge "Keys of Münster" No. 881went ahead with a substantial participation from the Lodge "Zu den Drey Balken" Nr 127. The consecration took place on Saturday, January 13, 1962 at 3:45 p.m. in the social room of the Blücherstuben, Diepenbrockstrasse 30 in Münster. This social room was located immediately adjacent to the clubroom and held a maximum of 60 people. According to VGLvD records the consecration ceremony was performed by the Most Worshipful Grand Master (VGLvD), Patent Attorney Dipl. Ing. Richard Müller-Börner.  The consecration date had already been set for November 25, 1961. This date was however later changed at the request of Bro. Holmes.

Br. Hans Schultheis from Cologne-Marienburg was commissioned by the "United Grand Lodges of Germany"  (VGLvD) to act as liaison to the British Lodges and to undertake the necessary preparatory work. During the consecration/installation the Brethren, the guests, the Grand Officers and the Most Worshipful Grand Master were introduced by the host Lodge "Zu den Drey Balken" No. 127. For this purpose, Br. Hans Schultheis entered into active written correspondence with the Brother Secretary of the Lodge "Zu den Drey Balken" No. 127. The opening of the ritual ceremony took place in the German language by the acting Worshipful Master (MvSt) Br. Dr. Ing. Arno Wolf.

The gavel was proffered to the Grand Master Br. Müller-Börner, and the work was continued as Grand Lodge work (VGLvD) in the German language. After the installation of the first Worshipful Master Bro. Major Robert G. Holmes, the newly consecrated Lodge continued their work in the English language.

The subsequent Festive Board was held at 8:00 p.m. in the small Hall of the Bahnhofsgaststätte in Münster, with all the Brethren and guests. Soon after the Lodge "The Keys of Münster" No. 881 was located at the 6th Infantry Workshop R.E.M.E. (contactWBro. Capt. E. J. Hebblethwaite). Later the Lodge meetings were held at 40th Regiment Royal Artillery in Münster, Westphalia. Written communication to the Lodge was officially through the Secretary Bro. Capt. J. Mitchell R.A. British Forces Post Office 17. Several British Brethren of the Lodge "Keys of Munster" No. 881acquired dual membership in the Lodge "Zu den Drey Balken" No. 127.

The Lodge Jewel is a combination of the crossed keys logo of the 2nd Infantry Division, who were part of the British Army of the Rhein (BAOR), stationed in Münster and the local Münster Town Hall (Rathaus) logo, combining the City of Münster and the British Military with Freemasonry universal. 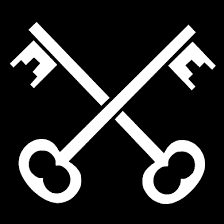